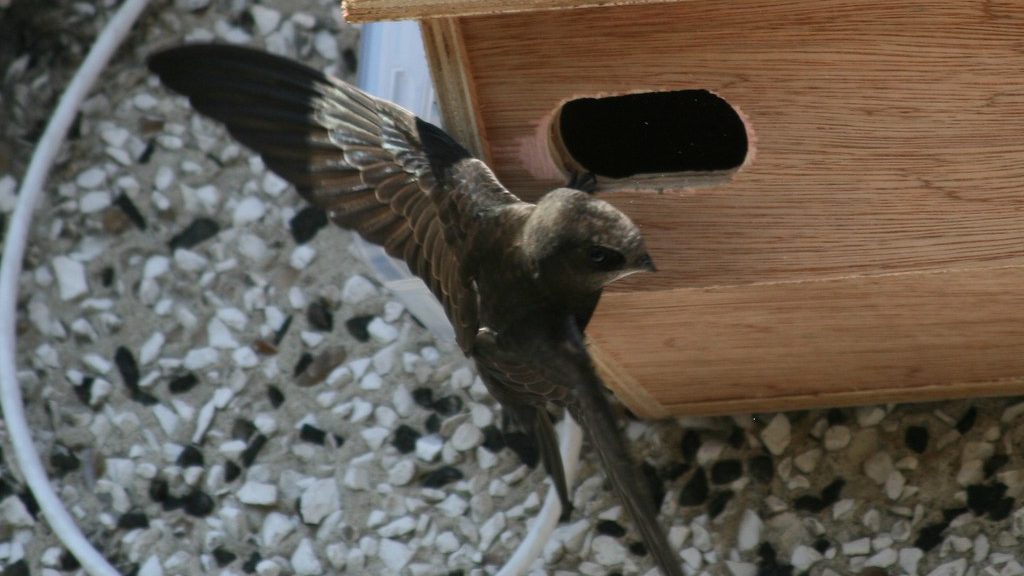 At one time swifts were a common sight in our summer skies, performing their aerial acrobatics, wheeling and screaming their high-pitched calls after their marathon journeys from Africa.  Sadly, these sights and sounds are less common nowadays since the number of these iconic birds arriving on our shores is unfortunately declining.

One reason for their decline is the limited availability of suitable UK nesting places.  Swift conservation organisations (swift-conservation.org) are ‘doing their bit’ to counteract the problem.  Could Normandy help? FNW believed that it could!

In 2018, the Head of the ‘Swift Conservation organisation’, Edward Mayer, had given a talk to FNW members in which he explained that Normandy should provide a good environment for swifts, and he recommended the Village Hall as an ideal building on which to site some nest boxes.  We learnt that the nearby bird reserve at Tices’ Meadow had erected a swift nesting tower.  Could Normandy do something similar?  FNW decided to take up the challenge; we would set out to attract swifts into the local area by providing, not a tower, but nest boxes on the Village Hall.

Getting the project of the ground….

FNW committee members discussed the idea with members of the Management Committee of Normandy Village Hall who were very supportive and helpful.  We all agreed to place four swift nest boxes unobtrusively under the eaves of the Village Hall. The site selected was on the end of the building nearest to the car park.  We had to make sure there were no means of access for rats or squirrels; that the entrances were sheltered from wind and rain; and that the boxes were clear of obstructions to allow the birds to fly straight into the entrance holes. Swifts are tidy birds and the adults eat their chicks’ droppings so the set-up would be as maintenance free as possible.

Enticing the birds to their new homes….

Having bought some suitable nest boxes we had to think about how to attract some occupants.  We knew swifts had been seen flying around the area but we needed to attract them to these new ‘Des Reses’.  A recommended way of doing this is to play them swift calls, so we also mounted a small specialised ‘swift call’ mp3 player near the nest boxes.

Breeding birds arrive from Africa in early May returning to the nest sites they had used in previous years, hopefully in the local Normandy area.  Two-year-old birds return to the UK from mid-May onwards looking for a nest site, and to mate and start nest building, although they will not actually breed until the following year.  It is these birds that we hope to attract.  One-year old birds arrive in July and do not stay long, but they are looking for swift colonies to join so we could attract these as well.   With these dates in mind, calls are played from mid-May and continuing until the third week in July.

Let’s all keep our fingers crossed and hope for success!

It could take several years to entice the swifts to nest – this is year 2 of the project – but we know swifts have been spotted in the parish so we can hope that it is a lot sooner.  House sparrows might build in the nest boxes to begin with, but these little birds are also declining so that would be good!  We would just need to clean the boxes out afterwards.

From May onwards keep looking skywards and if you see swifts in the area please let us know.  If you see them exploring the nest boxes then that would be even better!

Top photo of swift at box by fs-phil under creative commons.

The BBC reports conservationists are hoping to turn Edinburgh into a sanctuary for swifts after a drastic decline in the bird’s population. Numbers fell by more than 50% in the UK between 1995 and 2016, when the estimated average population dropped from 125,500 to 59,000.

One of the biggest challenges that the species faces is the loss of nesting sites in older buildings, which are often blocked off during renovation work or lost when buildings are demolished.

The Daily Telegraph exclusively reports wandering through the Sandringham Estate, one may hope to spot a skylark in full song – or perhaps even a member of the Royal Family out for a stroll. Soon, however, tourists are likely to be startled by the sight of the giant wings and hooked beak of Britain’s largest eagle as the royals welcome the work of local re-wilders hoping to bring them back. Wild Ken Hill – a farm recently taken over by re-wilders working to restore lost nature to Norfolk – is about a 10-minute drive from the royals’ home in the county.

The Independent, Daily Mail, and iNEWS report the number of cranes inside the UK has reached an all-time high since the species became extinct here 400 years ago, a survey has revealed. The research from 2020 – shared by the Royal Society for the Protection of Birds (RSPB) on Monday – found 64 new pairs living across Britain, which produced 23 chicks, bringing the total UK crane population to more than 200.

The Daily Telegraph reports gulls and feral pigeons can survive by scavenging from humans while other birds suffer from the loss of wild spaces. A poll by Gardeners’ World magazine found that sightings of some of Britain’s best-loved garden birds had dropped over the past two years, while readers were increasingly spotting the scavenging birds. While overall sightings grew by 11 per cent, the poll, which had 2,500 respondents, revealed that some birds were being spotted less often, including blackbirds, blue tits and sparrows.

The Guardian reports consultation comes after the birds have been successfully rewilded in other parts of the UK. A consultation has been launched to reintroduce Britain’s biggest bird of prey to Norfolk in an unprecedented rewilding move led by farmers. Supported by other landowners in the region, a west Norfolk farm wants to release white-tailed eagles on to its coastal land, after the successful reintroduction of the birds in western Scotland and the Isle of Wight.

The Guardian reports the willow tit has become Britain’s fastest declining resident bird, and one of half a dozen imperilled woodland species, according to the definitive survey of the country’s birds. Numbers of the diminutive tit, a subspecies unique to the UK, have plummeted by 94% since 1970, and by a third since 2008.

The Daily Telegraph reports with long journeys to go ‘birding’ curtailed by the Covid-19 regulations, sales of tiny ‘noc-mig’ microphones to record migrating birds flying overnight went up. They managed to discover that the Common Scooter is much faster than previously thought with 800 households logging data that showed it crossed the UK in a matter of days rather than weeks. The Telegraph reports Britain’s garden birds could be wiped out in 80 years if climate change continues to accelerate, research from the University of Oxford has warned. Warmer weather earlier in the year could disrupt the delicate ecosystem balance which keeps the little birds which visit our gardens alive.