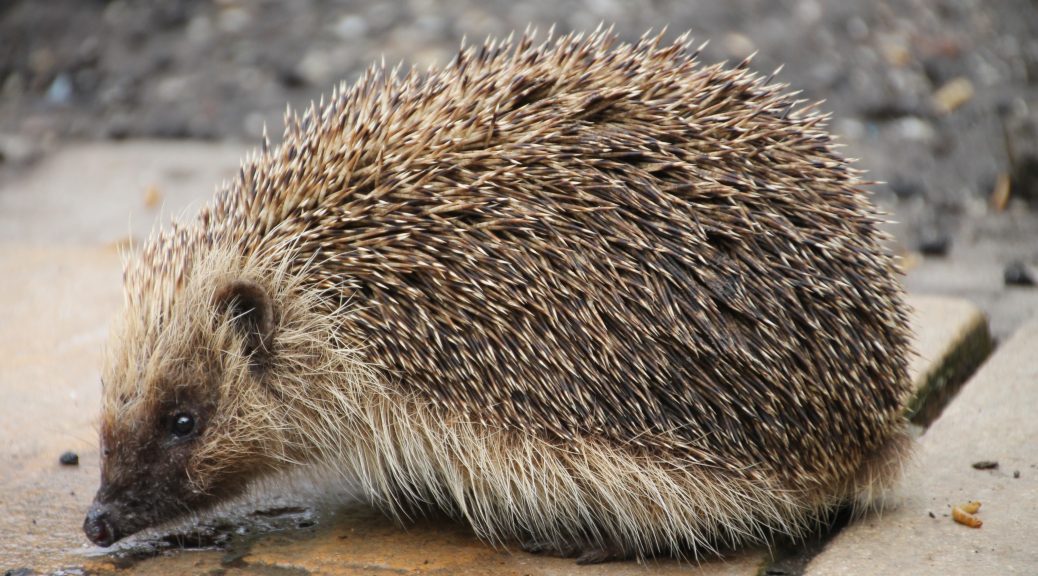 A great evening of fun was had by all with a hearty supper, two quizzes and a photographic competition.

In November we listened to a fascinating talk on the unique environment of the Surrey heaths focussing on the RSPB reserve at Tilford (now called Farnham Heath), together with Hazely Heath in Hampshire. Mary Braddock, a volunteer RSPB warden (and stunning wildlife photographer), explained the history of the heathlands and how they are maintained and conserved for the variety of species of plants and animals they support. Many, such as the Dartford warbler, wood lark and sand lizard are nationally rare and we are fortunate to have them on our ‘doorstep’.

In October, members were fascinated by a talk on otters by Chris Matcham including hearing about the return of otters to Surrey’s rivers in 2009.  He began with some grim statistics of how otters had declined since the second world war with, at one time, only a few isolated populations left in the West country, Wales and Scotland. Hunting, changing agricultural practices and increased road traffic had all taken their toll. But then there was good news! An end to hunting, and a concerted effort to better managed agricultural land and rivers, have seen populations start to rebuild and animals spread around the country so that now most suitable rivers, including those in Surrey, have resident otters.

We heard all about the otter’s life history and were shown where and how to look for signs that otters were about. Soon after this, FNW’s chair was thrilled to find an otter spraint on a stone exactly as pictured in Chris’s photos, albeit in Devon not Surrey!

There was a full house in September for the Friends of Normandy Wildlife’s (FNW) first talk of the 2017 Autumn season. By popular demand we invited Dr Nigel Reeve back to talk to us again about our much loved hedgehogs and give us an update on the hedgehog radio tracking project in Regents Park that featured on Springwatch. We were amazed to hear how far a hedgehog travels at night. The Park Authorities have helped in these night-time wanderings by adjusting the distance between fence railings to allow the animals free access around the park, something we need to think about in our own gardens. [Members only] Led by Bill Stanworth around thirty of us set out at 21.15 on a cool July evening to listen to the nightjars on Normandy heathland. These birds are one of many of our summer visitors who make the often hazardous journey from Africa to breed in the UK before heading back to warmer winter temperature in late summer. Nightjars are nocturnal and hawk for moths and insects at dusk and dawn. Their plumage is grey-brown mottled, streaked and barred which provides ideal camouflage in the daytime while they rest on fallen trees or logs. They nest on the ground and only lay one or two eggs which is why dogs need to be kept under control in the breeding season.

We made our way to an open area and were lucky enough to see and hear a woodcock flying over us to his roosting grounds. Before long a couple of nightjars started churring. To enhance the sound Bill told us to cup our ears and we were all surprised how much clearer we could hear them. It is the male birds that churr to establish their territories. We moved deeper into the heathland walking on the paths between the heather and gorse hearing the churring all around us. Only a few of us managed to actually see a male who makes a hand clap sound caused as he claps his wings in flight with white markings on his wings and tail. The female looks very similar but with no white markings.

(Members’ walk) James Giles the Reserve Manager for Natural England was met by some of our enthusiastic members with camera’s and binoculars swung over their necks! Before we started James explained that Thursley Moat and Common is a National Nature Reserve and is on the Greensand Way. The marshy nature reserve is punctuated by ponds with open heathland and pine and deciduous woodlands which are crisscrossed by trails. In 2012 James and a handful of volunteers upgraded and widened the boardwalk plus information display boards.

On a windy but sunny day we set off past the pond heading for the boardwalks. We were amazed at the sight of so many damselflies, the large red, banded , blue-tailed and common blue along with a four spotted chaser and the dazzling turquoise blue and green emperor dragonfly. James pointed out the rare bog raft spider that many of us had first heard about on Springwatch that very week on TV. Our ears pricked up when we heard the unmistakeable sound of the Curlew the only breeding pair in Surrey, binoculars zoomed in and he was spotted in marshy grass. Suddenly in the air a hobby was sighted having recently arrived after spending the winter in warmer African temperatures. We saw the beautiful carnivorous sundew with its red hairs at the base of the plants rosette, its these sticky tendrils that will trap its prey of unsuspecting insects. Early marsh orchid along with heath wood-rush and bedstraw were also pointed out to us.

James took us onto the heathland and many of us were thrilled to see a juvenile redstart peeking out of low silver birch. A skylark the unmistakable sound of summer was suspended somewhere overhead when James showed us some very rare marsh clubmoss. Our planned 2 hour walk turned into a very enjoyable three hours.

For many of us, fond childhood memories of ‘Ratty’ in The Wind in the Willows give an immediate affinity to the water vole.  Alex Learmont from the Surrey Wildlife Trust gave an excellent talk about this ‘water rat’ recognised from the brown rat that shares its home, by its blunt nose, small fur-covered ears and short furry tail.  When Kenneth Grahame’s book was published in 1908 there were an estimated 8 million along our British waterways. Sadly, they have disappeared from 94% of former sites and a water vole hasn’t been seen here in Surrey since 2008. They are common across Europe where they are both terrestrial and aquatic, yet in the UK they can only live near permanently open water (not greatly evolved for water they dive only up to 20 seconds at a time to escape predators) with good bankside vegetation (to eat 80% of their body weight a day from any of 227 different species of plants!).  With these dependencies they are threatened by poor habitat management, flooding, drought, canalisation, pollution, and predation by cats and the non-native American mink.  While these threats remain, the option of reintroduction, which has been successful in other counties, is not yet on the table, but volunteers continue to search for the neatly cut vegetation at  feeding stations, burrows, runs and ‘tic tac’ shaped droppings in latrines that will indicate the presence of water voles.  If you’d like to help the Surrey Wildlife Trust find Ratty again in our waterways please email alex.learmont@surreywt.org.uk Danial Winchester, the Ecology Services Manager at Surrey Wildlife Trust, gave us an interesting talk on the ecology and conservation of British amphibians.

The presentation started with an introduction to Britain’s native amphibians; the common frog, Northern pool frog, common toad, natterjack toad, great crested newt, palmate newt and smooth newt. Each species was looked at in terms of their habitat, ecology and life-cycle. This was followed with a look at non-native amphibian species, of which there are several in Surrey, before talking about the many threats to amphibians, such as disease and habitat loss.

He also talked about toad crossings , of which there a number in Surrey, where volunteers help rescue toads, frogs and newts from busy roads that they are migrating across in order to get to their breeding ponds.

Finally the presentation ended on a positive note when Danial explained how anyone could help amphibians by creating ambition-friendly garden ponds and sending in details of sightings.

If you do spot frogs, toads or newts in Normandy or elsewhere then please email them to fnwildlife@google.com. February’s wildlife talk saw Jamel Guenioui from Surrey Amphibian and Reptile Group (SARG) open our eyes to the reptiles with which we share the county. Retiles are coldblooded; they use the sun’s energy to heat up and then regulate their body temperature by moving between warm and cool areas. This is beneficial as they require far less food to sustain themselves.

Surrey is home to all six of Britain’s native reptiles and our lowland heathland is of particular importance for sustaining their populations. Most likely to be seen are the common lizard, slow worm, grass snake and adder, with the smooth snake and sand lizard rarer and with a restricted range. They are most active and visible in spring when getting into breeding condition; they are seen less over summer and are active again in autumn before hibernating over winter.

Keep an eye open for reptiles when out and about: walk slowly, scanning sunny sides of vegetation such as bramble thickets, log piles or sheltered areas amongst heather. For more information, check the SARG website at www.surrey-arg.co.uk.

Dick Shaw, Country Director of CABI UK (Centre for Agriculture and Biosciences International) Regional Invasives Coordinator  prvided us with a fascinating talk.  CABI is an international not-for-profit organisation that improves people’s lives worldwide by providing information and applying scientific expertise to solve problems in agriculture and the environment. Their approach involves putting information, skills and tools into people’s hands. CABI’s 48 member countries guide and influence their work which is delivered by scientific staff based in our global network of centres.

CABI’s mission is to improve people’s lives worldwide by providing information and applying expertise to solve problems in agriculture and the environment.

They achieve their mission by:

The centre operates across the globe providing support on a range of topics, including invasive species, pests and diseases, knowledge management and commodities.

Its scope is extensive – it carries out around 70 projects each year, which range from working to identify nematodes that are new to science in Chile, to seeking natural enemies for Europe and North America’s most invasive weeds.

With over 75 staff, a growing team of scientists carries out applied scientific research to find safe and sustainable solutions to problems in agriculture and the environment. An array of labs, glasshouses, poly tunnels and two level 2 quarantine suites with eight climate controlled chambers, mean the centre in Egham is perfectly equipped to work with almost any organism in the world, in ideal conditions.

The centre is also home to CABI’s Microbial services team. The team’s specialist staff provide microbial expertise, with particular emphasis on agricultural and biotechnological applications. Services provided include microbial identification, culture sales and deposit, environmental and industrial investigation, contract research and provision of publications and training. The team’s work is supported by the Genetic Resource collection on site, which holds cultures of 28,000 living micro-organisms.